A mixture of proud revolution and Caribbean nostalgia is captured in Werner Pavlok’s "Cuban-Expired", a project that reflects upon the Cuban lifestyle. The artworks take the viewer on a journey through time. His photographs combine historical ambience and impressive architecture. The German artist is internationally renowned and has exhibited with greats, such as Warhol and Gerhard Richter.
More information
19.7 x 27.6
Sold out
43.3 x 60.6
Sold out
55.1 x 77.2

House of Chino I

House of Magali I

ARTIST BOOK - Made in Cuba

House of Craig I 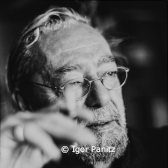 Palaces in Venice 'Over the course of my many visits to Venice, I have gradually learned about a place previously unknown to me: the Venice of the Venetians. It feels as if one is on the trail of a world long-since submerged.' Venice is world famous for its art and history: countless visitors from all over the world are drawn to the… Read more

'Over the course of my many visits to Venice, I have gradually learned about a place previously unknown to me: the Venice of the Venetians. It feels as if one is on the trail of a world long-since submerged.'

Venice is world famous for its art and history: countless visitors from all over the world are drawn to the narrow streets, St. Mark's Square, and the spectacular exhibitions of the Biennale. However, Werner Pawlok shows us the lagoon city from another, lesser-known perspective. He gives us an insight into the innermost parts of Venice, which remain hidden from most visitors. Through this, he shows art and history from a surprisingly private perspective, far away from tourist crowds and postcard-worthy views. Pawlok succeeded in gaining access to the most sublime and impressive palazzi in the city, staging their interiors in his distinctive style.Using bold colors, he captures Venetian history reflected in the architecture and ornate furnishings of the houses. Centuries-old heritage appears in a new light and stimulates the viewer's imagination to fill the vacant spaces with historical personalities and intriguing anecdotes. Pawlok's works are photographic time travels with unique charm and an impressive tribute to La Serenissima and its flourishing beauty.

Cuba - Expired
Can one make joie de vivre visible in a room devoid of people? Werner Pawlok can. In Havana’s decaying houses, the photographer captures the Caribbean city’s morbid charm as well as a sense of the Havanans’ vitality.

Former glory and traces of the decline are side by side in Werner Pawlok’s Havana photos. Palatial residences from the old sugar aristocracy seem to entrust him, revealing their weathered countenances. The beauty of the Cuban capital and the history of Havana have bittersweet aftertastes. It is a lost world, left to decay. Pawlok brings the viewer under the spell of the old city, in which former luxury is felt merely as a relic of the past.

A self-taught photographer from Stuttgart, Germany, Werner Pawlok first picked up a camera when he was sixteen in order to take pictures of his idol, Jimi Hendrix, onstage in 1969. Since then, he has been looking through a lens into the depths of rooms and souls. Even if the people in front of the camera would prefer otherwise, Pawlok captures their very essence in his one-of-a-kind photographs.

Pawlok’s work enjoys wide recognition around the world, with numerous international awards, solo exhibitions, and group exhibitions with great artists such as Warhol, Richter, Mapplethorpe, and Polke. Pawlok’s career began in 1977, when he opened his first studio in Esslingen, Germany. Sever years later, he moved to Stuttgart. In 1988, he went to New York for a year. In addition to his haunting black and white Polaroid portraits of authors, his signature style is most recognisable in his “Photography Paintings” or in his celebrity and fashion photographs.

Werner Pawlok is self-taught. That does not just mean that he learned all his techniques by himself, but also that he is the kind of artist who will not be stopped because he cannot do something or because something does not appear to be possible. He managed to get ahold of one of two specialised large-format Polaroid cameras in existence. He takes this same approach to his subjects: unafraid and open to all possible outcomes.

In the Polaroid transfers, Pawlok combines painting and photography. He developed a process of transferring the large-format Polaroid negatives onto hand-made paper and then finishing them by painting on them. Pawlok’s style is variety. He meets every new challenge with curiosity and openness.

Interview
When did you become interested in art? How did it all begin?

For me, art is first and foremost a feeling. I see art as life, not as galleries, collectors, money, etc. Every day brings new experiences which resonate with me and eventually transform into energy, which I use to create images. I’ve experienced this feeling since youth and not much has changed since. It all began with a camera that my parents gave me as a birthday present when I was little. For me this was a direct way to transform observations into pictures.

Generally, my work process is always different. It depends on the specific project I’ve chosen. Before I start a series, I decide which technical equipment I'm going to use – and, at this stage, I question whether any new technology is available that I’d like to incorporate into my process. I love the risk involved and how it keeps things new and interesting. It’s important for me to fully understand the work process so that I can implement it properly an achieve my vision.

During a recent trip to Venice, I had the opportunity to see the Uncertainties Installation in the Spanish Pavilion at the Architecture Biennale, and I was quite impressed. The floor-to-ceiling exhibition, created using thousands of pieces of paper related to the pandemic and the Spanish real estate bubble, maintains a sense of lightness despite its density. It was created by Itzar Okariz and Sergio Prego.
Which artists/works of art are you particularly impressed with at the moment?
Classic photographers never fail to impress me. Man Ray, Erwin Blumenfeld and Irvin Penn, to name a few.

If I am satisfied with the result of my creative process and of course, if it is appreciated by exhibition visitors.

I am currently working on my new book Dimore Veneziane. It’s a photographic love letter to Venice. The development of this project is particularly interesting. I began with photographs of palazzi on the Grand Canal and it evolved into a multi-layered, multimedia project with many different facets. It is quite different from my previous projects, both in terms of visual language and thematic range.

Above all, to inspire

It is not art, but life that should make one happy, and art is an essential part of life!