LUMAS uses cookies to improve your experience on our website. If you continue, we assume that you consent to receive all cookies on all LUMAS websites. Read More
More works by Mr. Pinkbrush
Beyond the streets 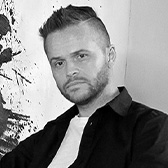 “Life is a canvas, every paint of the brush a step forward.” The unconventional Fabian Froehly (also known as Mr. Pinkbrush) is a street artist that likes to break the rules. Reimagining well known individuals is central to his work. Albert Einstein becomes an activist calling police to action, The Beatles are casual fashion monkeys,… Read more

Introduction
“Life is a canvas, every paint of the brush a step forward.”

The unconventional Fabian Froehly (also known as Mr. Pinkbrush) is a street artist that likes to break the rules. Reimagining well known individuals is central to his work. Albert Einstein becomes an activist calling police to action, The Beatles are casual fashion monkeys, and superheroes are the icons of fashion and art.


Mr. Pinkbrush remains innovative and still bonded to the tradition of street art. His work continues to explore visual representations that have been popularized by greats like Banksy and Mr. Brainwash. He integrates an array of his contemporary’s stylistic elements into his work, yet always presents and thematizes them in new contexts.


Street art gained international notoriety for its extraordinary visuals that celebrate the spectacular and surreal, and Mr. Pinkbrush does not fail to deliver. Colorful graffiti backgrounds, large lettering, policemen, bananas, and naturally – his tag, the art of signature that’s so fundamental to the street art genre. Like all street art, Mr. Pinkbrush’s work can be read as a social commentary, but it is built upon using laid-back, unassuming art and pop culture references. Leaving his works not only entertaining and stimulating, but also critical and thought provoking.


Mr. Pinkbrush studied design but realized early on the potential of combining graffiti and painting. He changed urban spaces by painting their walls and alleys. Afterwards, he began to spray canvases in his studio. Today his work is internationally admired.

Most definitely a wall – it’s more challenging than a canvas. When working on the street, the situation, the location, and the condition of the wall all play a major role. It may be cold, wet, or hot; It may or may not be a legal surface to work on. Given the latter, cans have to be prepared and shaken in advance to avoid noise. If you get caught, the only thing you can rely on is fast legs and strong lungs. That said, I still enjoy the challenge of a blank canvas.


Where do your ideas come from - like having Einstein walk a Koons balloon dog?

I live, breathe, and dream art because it is omnipresent. The inspiration behind a new idea can be a pattern in coffee foam, a weathered wall, a music video clip, a TV commercial, a fashion magazine, and so much more. I suppose it’s the sum of all influences - combined with a never-ending search for my next work of art. In “PEACE” – with Einstein and the Balloon Dog – I found the contrast fascinating. The idea of Albert Einstein walking a Balloon Dog is paradoxical, cheeky, and eye-catching. I wanted it to put a smile on people' faces. That's exactly what my art is all about.


Graffiti, Oil Paintings, Comics, Sketches – is there anything you can’t do?

My interests are far-reaching. And when I have the urge to learn new things and put them in to practice, I give in. I love to take on new challenges.


How would you compare spray-painting to brush work?

These two methods can’t be compared – the resulting works are just as different as the tools themselves. Spray cans are more forgiving, relaxed, and cool. Brushes, however, require the more nuanced skills needed to create multifaceted paintings.


The Vatican reaches out to you about redesigning the Sistine Chapel. Would you take on the project?

Of course I would! It would be a once in a lifetime opportunity and I’d have the chance to make history. There would be a lot of “haters” criticizing my work as Michelangelo’s successor. But I’ve never backed down from a challenge.