LUMAS uses cookies to improve your experience on our website. If you continue, we assume that you consent to receive all cookies on all LUMAS websites. Read More
More works by Claudio Gotsch
Black Edition
Engadin
Les grandes dames
Acrylic Objects
Africa Black Edition
Minis 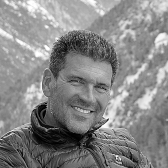 Sometimes Claudio Gotsch waits several hours in a camouflage tent, just for a good photo. “The animals have to come to me, not the other way around,” says the photographer from Engadin. The diverse wildlife of the Swiss High Valley is powerfully captured in his photography, which reflects his deep appreciation for nature. His black and… Read more

Introduction
Sometimes Claudio Gotsch waits several hours in a camouflage tent, just for a good photo. “The animals have to come to me, not the other way around,” says the photographer from Engadin. The diverse wildlife of the Swiss High Valley is powerfully captured in his photography, which reflects his deep appreciation for nature. His black and white photographs radiate a breathtaking intensity, which opens our eyes to how greatly this fauna needs to be protected.
His new work Albula is dedicated to a particularly symbolic animal, the Swiss cow. The Swiss cow embodies work, family, and traditions of the Alpine region and is widely known as a trademark of Swiss culture. This fascinating shot in elegant black and white style puts the cow’s individualistic hair patterns on display, lending the animal its own special character. The black background of this Black Edition takes the subject away from its usual Swiss Mountains, which turns the focus on the subject, bringing them closer to us. Through Gotsch’s staging, the cow from Albula Valley is transformed into a unique work of art, full of vitality. The artwork is a continuation of two other very successful portraits he created, Heimat (Home) and Junge Heimat (Young Home), where he also chose the Swiss cow as a motif. These photos are not only testaments to Gotsch’s love of his homeland, but also to his talent for staging and production.

He entered new territory with his Yak series. Though these stoic animals actually originate from the Himalayas and are important farm animals in the entire Central Asian region, their landscape and climate are so similar that the animals also feel at home in the Swiss mountains. For his new project Gotsch captured three yaks in his homeland and portrayed them in his characteristic style with a black background. The animals exude that same intimacy that we know from his previous works yet captivate with their unusual appearance.
Gotsch’s landscapes of his homeland, with their imposing mountain range, are characterized by profound peace and harmony. The monumental Alpine panoramas awaken our longing for a connection with nature so intensely that you can almost feel the fresh mountain air.
He found his passion for photography at an early age. “It is incredible what you can discover in nature when you have your eyes open,” he said, revealing his thoughtfulness and carefulness in his work process, the antithesis of today’s fast-paced life.

The Africa Black Edition is full of wonderment for the extraordinary and graceful wildlife in Africa. Travelling to Africa and completing this series was a lifelong dream come true for Claudio Gotsch, the renowned Swiss wildlife photographer. The challenges faced in the African nature were warmly embraced by Gotsch. Adapting to new surroundings all the time, he slowly and cautiously approached lions in the savannah, he followed the dynamic rhythm of the antelopes, and endured many long hours to avoid alarming the alert and cautious leopard. Even though he was so far away from his home in Switzerland, in those moments Gotsch was completely in his element. Skillfully, he approached the icons of African wildlife in their natural habitat and captured their untamed energy with his camera. For the inscenation Gotsch applied his own established style, exposing his subjects against a black background allowing for an incredibly intense proximity to the animals.

Bio
Swiss-born Claudio Gotsch is a self-taught photographer who began capturing the wildlife of his native country on camera at the age of ten. He worked for several years as a photographer at a hunting magazine before requests from other magazines and private clients increased. Gotsch then decided to work as an independent photographer and artist. After the release of his first series of works at LUMAS, TV appearances, exhibitions, travels to different countries and requests from all over the world came in. Claudio Gotsch currently lives and works in La Punt, Switzerland.
Interview
Picasso once said, "You don't make art, you find it." Where do you find your art?

Nature is the greatest artist - and that's where I find my art. You just have to go through the world with open eyes and you’ll discover one work of art after another.

Ideas often emerge on their own; nature is difficult to control in this respect. You can help with a little ingenuity and a lot of patience: I once spent almost an entire week with my camera in a snow hole to capture an image of an eagle landing. And then, of course, there are farm animals - species living in nature right around us. You can approach a project in a more targeted way given this scenario.

I am a visual person and, unfortunately, don't have a favorite book. My head is always buzzing with images. My world consists mostly of fantasy, curiosity, nature, and lots of pictures.

With quite a few, yet also none. I am interested in many artists, photographers and the like, but I have no specific role model or a favorite artist. Nevertheless, I have respect for all artists and highly regard their works.

How did you develop an interest in art?

I came to my art through my love for and closeness to nature. She is my role model and reveals her art to me. I complement this art with mine, placing it in proper lighting so it stands out. I've been doing this since I was 10 years old, when I first photographed a deer in the forest - that was my so-called start.

To be honest, no one. I like to do my own thing and try not to be influenced by others. However, my partner will give me tips for naming works and is often the first person to look at my latest projects.

I would love to travel to the time of the dinosaurs. The natural diversity in this time was immense and it would be a paradise of new and incredible impressions for me. To be able to discover the animals and the differing nature is a huge dream of mine.

My dogs and traveling to other countries. The Nordic countries, in particular, have attracted me very much. It's a paradise for landscape photography, and the wildlife is also very interesting and diverse - often new and surprising for me. Also, the rapidly changing weather opens up great moods for my photography.

In my head are thousands of images that I still want to materialize. The only thing missing is time. I would need 20 lifetimes to produce everything that is in my head. Currently I'm working on a couple of deer projects as well as a cow and a highland cattle. Several landscapes are also ready and waiting. Finally, a new homepage is in its final stages and my own gallery is planned to open in 2023.