LUMAS uses cookies to improve your experience on our website. If you continue, we assume that you consent to receive all cookies on all LUMAS websites. Read More
More works by Luc Dratwa
Flying High
Windows
Windows II
Minis

DREAM IS NOT OVER

NY ON MY MIND 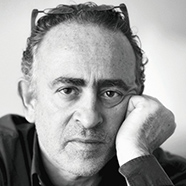 With their resemblance to paintings or drawings, Luc Dratwa’s works pack an expressive punch with emotional depth. Dratwa’s artworks are precisely composed and perfectly balanced. He lets every picture tell a well thought-out story, leaving nothing to chance. Flying High Some moments are brief, but full of emotion. Like when… Read more

Introduction
With their resemblance to paintings or drawings, Luc Dratwa’s works pack an expressive punch with emotional depth. Dratwa’s artworks are precisely composed and perfectly balanced. He lets every picture tell a well thought-out story, leaving nothing to chance.

Some moments are brief, but full of emotion. Like when your plane is flying over New York City and the Manhattan skyline comes into view. The city that never sleeps, yet always stirs our dreams – a place full of yearning. The fascinating photos in Luc Dratwa’s Flying High series offer a new way to gaze into the city. Through the window of an airplane, the architectural grandeur of the cosmopolitan city will awaken your memories of New York.

In the Windows series, we look out at New York’s world-famous Empire State Building. These works are more than mere photographs, however. Viewers feel as if they are actually standing at the window looking out over the city. The view sparks the imagination to come up with stories about the city that never sleeps.

The artworks “DREAM IS NOT OVER” and “NY ON MY MIND” belong among the pinnacle of his oeuvre so far. In these one-of-a-kind works, Luc Dratwa depicts urban architecture in profoundly touching visual language that capture the power of human creativity itself.

Following the success of his series overlooking New York’s skyline, the Belgian photographer invites us into the private worlds of distinctive rooms with a view of Paris’s most iconic monument.

While overlooking the Eiffel Tower rising from afar, we are invited to explore different lifestyles of the French capital’s residents. As in his previous works, Dratwa blurs the limits between reality and fantasy. These composed and carefully balanced works instigate feelings of contemplation and the intimacy of Parisian daily life.
Bio
Belgian photographer Luc Dratwa was born in 1958 and is an autodidact. His art features in international art fairs and exhibitions. Exclusively for LUMAS, Dratwa has created two new works for his famous series Windows. The artist is based in Brussels.