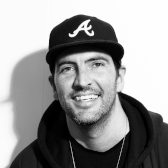 What does Batman do after a long day of saving Gotham City from criminal clowns and ruthless gangs of outlaws? He calls it a day, enjoys a glass of cognac in a stylish hotel bar, smokes a cigar, maybe even reads the newspaper. He deserves a little leisure after a rough day full of challenges and merciless fights. Sometimes even superheroes… Read more

What does Batman do after a long day of saving Gotham City from criminal clowns and ruthless gangs of outlaws? He calls it a day, enjoys a glass of cognac in a stylish hotel bar, smokes a cigar, maybe even reads the newspaper. He deserves a little leisure after a rough day full of challenges and merciless fights. Sometimes even superheroes need rest and relaxation. At least that’s the story Sebastian Magnani’s photographs depict, and it’s convincing - after all, Batman is the superhero without superpowers, he overcomes his opponents through will and ingenuity. He may sometimes need a break, but his brooding demeanor and elegance always remains.
Magnani skillfully captures the aura of the mysterious superhero and then places it within the context of our normal, everyday reality. Thus, colliding two worlds, surprising and inspiring us. The figure Batman becomes a person with whom we can identify with. Magnani doesn't portray the superhero as Bruce Wayne, who could walk into a bar at any time - he rather leaves him in his disguise. With this approach, Magnani creates a charming, unique Batman who behaves much differently than how you might expect.

Sebastian Magnani developed an interest in photography while completing an apprenticeship for media design. In 2011, after 5 years of creative work at an advertising agency, he decided to turn his passion into his profession. Since then he has worked as a photographer based in Zurich and has implemented various artistic projects. His series Daily Bat was inspired by a conversation that questioned: Who actually is the coolest superhero?

Picasso once said, "You don't make art, you find it." Where do you find your art?

Personally, I believe art emerges from the accumulation of experiences and impressions, which are subconsciously stored. After a chemical reaction - felt like the big bang out of pure nothingness - an idea suddenly emerges and manifests itself in the form of life or a work of art.

I always start with a sketch. Then I search the Internet for the best possible location and explore the site in person, at which point I determine the best time of day to photograph it. Afterwards I contact the respective team and organize additional elements if necessary. In the meantime, I book one of my models - sometimes myself or my girlfriend. Then we shoot on location and from the hundreds of photos I choose the perfect image. The image is then cleaned up/retouched in London and I do some fine tuning and experimenting with the mood and color of the final image.

I like variety and diversity. In the past, I read every book by Hermann Hesse, but recently I’ve enjoyed the simplicity of Robert Seethaler’s works.

There are so many interesting artists, such as Damien Hirst, Jeff Koons, Kaws or David La Chapelle. But since I watched Jeff Koons' masterclass, and Damien Hirst talks about his work extensively on Instagram, I would love to exchange a few words with David La Chapelle. Share in his experiences, feel his energy, listen to his perspective and just spend quality time together.

For a long time I had the need to be completely independent. And I was as a freelance photographer, but as an artist I no longer depend on clients looking for quick job. I can take my time to create my best work, not a week or a month, but as long as it takes. I can take everything into my own hands: the when, where, and how. For me, it is a near perfect life. The satisfaction is much greater because I rarely have to compromise; the work is 100% me and I eventually create something that will withstand years, decades, and hopefully centuries in our fast-paced society. Every person who has one of my images on their wall is a part of me and I am a part of them. And to have this support from my fellow human beings is the greatest gift in my opinion.

Definitely my girlfriend, since I spend most of my time with her and I ask her for advice a lot - but of course also my friends, with whom I meet every now and then to exchange ideas.

I would be interested to see what the world looks like in the future, whether and how it has evolved or regressed. I am a huge Matrix and Blade Runner 2049 fan.

I love entertainment like movies and music. In summer I go hiking in the mountains as much as possible. And recently I got my first motorcycle. I love to ride it around and unwind. Just being offline, stepping on the gas, cruising around the bends, and exploring Switzerland by bike.

I have a list of over 50 new Daily Bat's and would love to take Batman around the world - a book to accompany them would also be great. However, I am still planning and determining how and with whom I could best accomplish this. Of course I have a lot of other project ideas, but for now Batman is still the main focus, especially if it becomes possible to time-travel.