Conspicuous Inconspicuous If you ask Pablo Zuleta Zahr what his work consists of, it might happen that he’ll lean back, his hands locked on a knee, and focus on you with a nearly fierce expression: “I want to tell everything. And above all, I want to show the inconspicuous.” Just 28 years old, the Chilean can afford this charming… Read more

If you ask Pablo Zuleta Zahr what his work consists of, it might happen that he’ll lean back, his hands locked on a knee, and focus on you with a nearly fierce expression: “I want to tell everything. And above all, I want to show the inconspicuous.” Just 28 years old, the Chilean can afford this charming immodesty because he keenly knows what he means and his experiments are accordingly precise, effect-oriented, and promising.

Somewhere in a subway under neutral lighting he set up his video camera in front of a monochrome wall and held out for ten hours. In such places, one can’t distinguish between day and night and it’s only through the frequency of passers-by that one can decipher whether it’s bedtime or rush-hour. But the video that forms here is in no way the product that we get to see. What he gathered in two ten-hour sessions in Santiago de Chile and Berlin serves solely as material. Everyone that passes the camera is separated out later. Filed away, the passers-by await a new ordering in the panorama, sorted by clothing criteria. In doing so, no one is forgotten, no one is manipulated, no one appears twice. The actual course of the day is no longer interesting when Zuleta Zahr sets out to compose his scores from rhythms, forms, and colors. These timeless recompositions have a poetic power that is based on the meeting of appearance and being.

Until they eye detects the order in the chaos, the works initially have an effect like snapshots. The one picture shows a woman in fur, the other a secretary-type with a red blouse and a paper under her arm. Because they weren’t there at the same time they bustle past each other apathetically in the pictures, without poisonous side glances to the similarly dressed counterparts she could be mistaken for.

In another panorama we see a group of men who are all wearing a hat or young people who are all stuck in the same Adidas shirt – student-like figures with a uniform look. It escapes them that they’ve become uniformed because they only first come together in Zuleta Zahrs’s image-editing program.

Without any instructional gesture he tells us entirely offhand something about fashion and mass-produced goods, trends and stereotypes. Some, like the secretaries, appear to purposefully tailor themselves, others in contrast are blatantly anxious to protect their individuality at any price, which has an even more grotesque effect the more frequently it crops up.

A type of statistics has arisen out of the seemingly haphazard diversity that video pictures once showed. However, Zuleta Zahrs’s typologies are not an outgrowth of shopworn officialdom and don’t have anything of the often brittle sternness which, in the spirit of Bernd Becher, continues to have an effect on the Düsseldorf Academy. Zuleta Zahr studies there under Thomas Ruff, but his works are a respectful liberation from the passed-down traditions. Radically manifest in the work of the student is the school of seeing - upon which Ruff places particular importance – and the skepticism towards the mass scale of picture production. It’s not in same the manner of Ruff students Natalie Czech or Thomas Neumann, who fully abolish their own new productions of images of reality, but Zuleta-Zahr reaches a similar, clear verdict: the impressions that one can absorb in two days hold enough material for two years. As an artist Zuleta Zahr has the possibility to indulge the treatment with the luxury of time.

“I don’t know anything about these people,“ Zuleta Zahr says looking at the fleeing passers-by that have occupied him for months, “I only look for the coincidences.” That again sounds very unassuming. Because doesn’t a panorama of our society hide within these accumulated coincidences? The deeper we go into them, the more we find out about questionable individuality, about brand consciousness and about similarities and differences between two metropolises on two continents in a globalized world.

The Order of Randomness

“Just as there’s a comparative anatomy, from one which first arrives at a concept of nature, so did this photographer execute comparative photography.“ So wrote Alfred Döblin in 1929 about August Sander, who set out to record “People of the 20th Century” according to social type. His passive, distant portraits show über-individual representatives of the various professions of his era and seemingly have nothing to do with Zuleta Zahrs’s view. Doesn’t he pick out as a central theme, the speed of our present that brings about anonymity and breathlessness?

And yet, there is the corresponding presentation of “People of the 21st Century“ in Zuleta Zahrs’s compositions, be it as it may a notion adapted and conformed to our time. It’s no longer the social standing and classes that he separates from one another – today they’re often only with difficulty differentiated through outward appearances -  but rather only the colors and forms of a de-individualized civilization that is threatened with drowning in mass production and arbitrariness.

The variations of this theme that he devises are mirrored in their arranged balance, in their refined compression, yet also in the dream to free oneself from the constraints and politeness of day to day existence, or at least to observe them from a relative distance for once. They prompt you to casually lean back and, relaxed by music and red wine, take the time to fully unfold their complex potential which is made up of ethnographic analysis, choreography and sensuous color study. 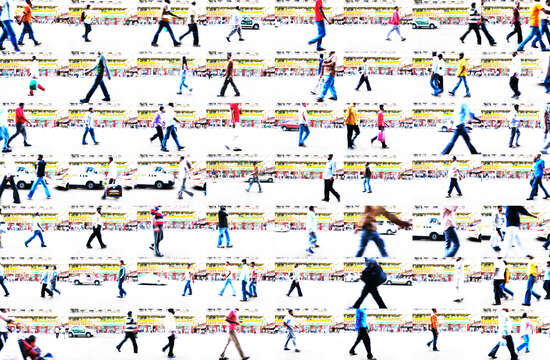